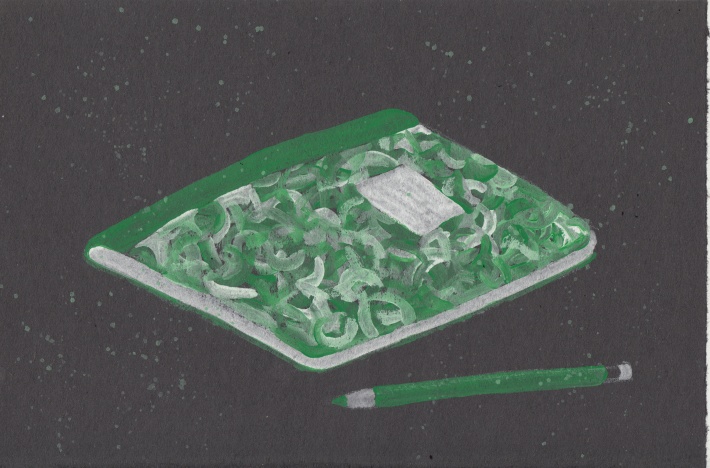 Svadyaya is the practice of self-study. In yogic practice we are training our attention on the moment to moment nature of our own body and consciousness, learning to see with greater precision and depth. The practice evolves as our capacity to perceive develops. In the context of yamas and niyamas, we are refining our capacity to recognize and understand our own motives, the desires and aversions that propel us to action, sometimes unwisely.

Like tapas, writing about svadyaya in the climate action context has frustrated me for awhile, but this month it came into focus. I had been stuck on an interpretation about examining one’s own behaviors and the paradox of individual choice kept arising: how are our personal choices significant and insignificant? Are they political or apolitical? I spent last week in a climate arts incubator where this theme came up again and again; how worthwhile is it to focus on people’s behaviors and consumer choices as a locus of change? I argue that it’s a small lever when we only have time to focus on big levers, and that there’s always a bigger systemic change to aim for that would directly impact individual behaviors. I also argue that people lose steam when they want to address the climate crisis and all they can imagine to do is household stuff. At the same time, behavioral changes can be politicized, as in boycotts, community initiatives, and as first steps to educate people about the systemic problems.

But now, instead of that interpretation, I’m thinking about the conversation among climate people following the publication of NY Magazine’s worst case scenario epic. Many climate professionals condemned the piece as scare-mongering or more mildly criticized it as ‘ineffective communication strategy.’ The messaging conventions that have been shown to ‘work’ are solution-based: scare then solve, with an actual metric of 3-1 solutions – fearful info. And obviously these claims are based on real research, but yet this proven strategy is not powering the mass movement that would inspire actual 3-1 confidence. (David Roberts rebuts these responses elegantly on Vox here. Obviously I agree with him.)

What we know: it’s a very bad situation. People have a moral imperative to fix it. Our current leaders are denying the problem exists (and disappearing public information about it) while fanning its flames. We have no time left.

Working on the problem means continually encountering the pain and grief of the problem. No one likes to do this. So: In order to work on climate in a meaningful way, you have to walk through your own valley of death. You have to confront the worst case scenario that you find most paralyzing. There’s no way around it: if your activism is based on a belief in good outcomes or avoidance of suffering, it’s a house of cards. You could expand the point to say that any plan based on the avoidance of suffering is an unrealistic plan, but sticking with climate, your own shadow is not going anywhere, and really examining it will sometimes put you out of commission.

There are days when I really let myself feel how scared and sad I am, and I lie down and I cry and cancel plans and can’t work. But it passes, not because the problem goes away, but because my physiology can’t sustain active despair for more than a couple days before it presents me with something different. The consolation prize for lingering in the shadow place is that ordinary bad climate news doesn’t broadside me (summers like Charleston in Chicago? Heard it. JFK and LaGuardia underwater? NBD.) The soft-denial bag of tricks — deflection, avoidance, minimization, cynicism, abstraction — doesn’t hold as much sway over me as it once did. And I’m much more tuned in to those same strategies at work around me.

Svadyaya is the practice of holding yourself to a higher standard of self knowledge and inquiry. What are the words and phrases that activate your fears? What are you drawn toward, and what repels you in the discourse around climate? Are there areas of your life that you’ve prevented your climate awareness from touching? What are your social behaviors around a climate conversation: do you need or hope to be seen a certain way? Do you use climate as a tool to uphold or rationalize beliefs, biases or behaviors that may be harmful? The beauty of svadyaya and the other niyamas is that they are internal practices.  Your discoveries are grist for your mill, they don’t need to be performed for the activist self-criticism session or broadcast on social media. It’s probably enough to shed light on this stuff in order for it to start to shift around.

At the same time, the goal of svadyaya isn’t necessarily so-called self-improvement. The yogic premise is that the lower-case-s self is an illusion, and we study the workings of the illusion to better recognize it and instead identify with the universal Self. We’re little, imperfect, culturally conditioned slices of a much larger pie. As for me, I’ve driven around for the fun of it countless times. I haven’t read most of the books I own about climate change. The idea of permafrost melting is my kryptonite: I can’t even think of it if I need to be present and smiling somewhere. I still cherish a dream that I’ll get to do other meaningful stuff in my life that’s not climate related, but I don’t see how or when.  I’m also not giving climate my 110% body on the line. My belief is that we shouldn’t have to, but I also believe a day will come when that changes. For some it’s already here.

It’s still sometimes lonely over here in a world where this threat is given the importance it deserves. I’m not sure that will change. Some people are drawn to linger here in the climate reality, myself included, by impulses that may say as much about our emotional build and needs as they do about the actual situation. Why are we drawn toward this work that repels so many? It’s our responsibility to examine those impulses as honestly and closely as we can, then wear that knowledge out into the world. I believe that the more whole and humble our understanding when we speak, the less we’ll need to rely on metrics of effectiveness.