Breaking Free by Getting Jailed in Whiting, Indiana

According to Carbon Brief’s analysis, we’re on track to pass 1.5 degrees Celsius temperature rise within 5 years. It’s hard to integrate this fact into daily lives that proceed in the ordinary way. As the laws of physics implement themselves without emotion, people have to generate their own urgency. From May 3rd til May 15th, under the banner Break Free from Fossil Fuels, and through twenty actions in twelve countries on 6 continents, a coalition of climate justice activists escalated their protests against fossil fuel infrastructure.

And paradoxically, as a result of #BreakFree actions, a lot of people -myself included- have just had their first experiences of jail.

British Petroleum’s refinery in Whiting, Indiana was recently expanded to become the largest tar sands processing site in America, at a confluence of Enbridge pipelines. Those of us who were arrested while peacefully occupying a main entrypoint to the refinery on Sunday, May 15th, are still waiting for the full repercussions of our action, but I already experienced some benefits of my luck and privilege when I went to sleep in my own bed on Sunday night with no bruises or cuts on my body.

Because of the support of local lawyer and former sheriff Roy Dominguez, and because of a variety of factors (abundance of white skin and grey hair among protestors, soothing, soporific songs, lots of department chiefs on hand to supervise inter-force collaboration, etc.) we were arrested without force and released without bond late that evening. The jail support team cheered, fed and watered us, returned the contents of our pockets to us, and organized the rides and transit to get us home that night, or for those visiting from MN, MI, WI, etc., within the following days.

Another Whiting arrestee, John Halstead, wrote an clear and detailed account of the events for the Huffington Post entitled Why I Chose to Get Arrested on Sunday.  He also describes the process by which he converted from an ordinary, non-recycling middle-aged lawyer to a person willing to be arrested for the climate.

The day before Halstead’s piece appeared, a friend and Conceivable Future ally from the west coast, Erika Lundhal, had published an article in Yes! Magazine now titled When the Police Came, I Didn’t Risk Arrest. So What Was My Role at the Break Free Climate Action? She wrote about the mixed feelings that accompanied her last minute decision to step out from a group risking arrest after three days of blocking oil train traffic. Her soul-searching felt familiar to me: my first arrest, in Indiana, marked my third participation in arrest-risking actions, but it was the first time I felt calm, ready, and unafraid.

On September 22nd, 2014, I participated in a direct action called Flood Wall Street, in NYC. It was the hard-line rejoinder to the Great Climate March, which had lifted a lot of spirits and moved a lot of feet, but had not pointed fingers or named names. I was living with my parents in Manhattan during the last several months of my father’s life, and I’d left the house that morning talking a big game about how they might not see me that day, and I might call them from jail, etc. My stomach was in turmoil as I rode the subway to South Ferry.

Approximately 2,000 people were gathered at the staging grounds in Battery Park. We helped Naomi Klein and Chris Hedges learn to operate the people’s mic. We had a brief non-violent direct action training, and then we marched out of the park. We quickly took State Street, and flowed up onto Broadway, around double-decker sight-seeing buses full of enthusiastic tourists, around resigned taxi drivers and angry commuters. 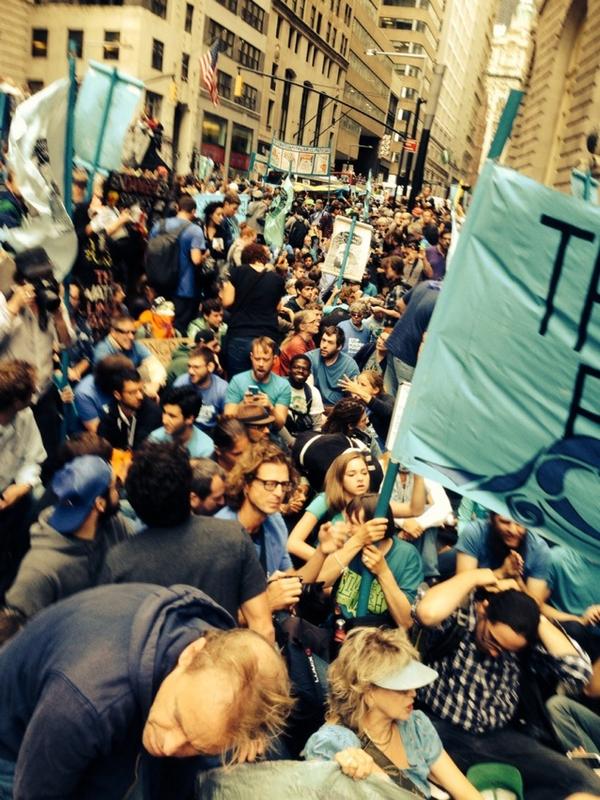 We made it one more block before the police halted us, and the crowd was full of the zinging energy of uncertainty and risk. We stood, sat down, stood, etc. I caught up with a friend, and we shared what rumors we’d heard. After some time the crowd hollered an announcement to each other that people who were willing to be arrested should stay seated in the street, and those not willing should get to the sidewalk, outside the metal barricades.

After a year and a half, the story tells itself: my father died two weeks later. This would have been a shitty, inconsiderate time to take that risk, when I could have missed precious time talking with him and making my mother’s life easier. But in the moment I mostly felt hot shame as I parted ways with my friend and scuttled to safety. My heart was in disarray: was I not committed? Was I so precious? My timidity was even more shaming to me as the day wore down: arrests only began in earnest at 7:30pm, capturing a hundred very patient activists (including a polar bear and two Captain Planets). Regardless, I came home, I made myself useful to my family in a difficult moment, and the movement rolled along without my sacrifice. 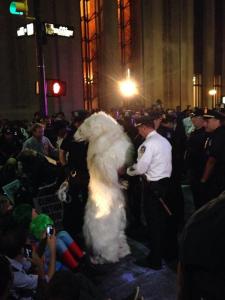 This time was different in several important ways. Primarily, my affairs were in order: I had no obligations in the days following that event, my mother had told me she was proud of me. Also importantly, people considering arrest got a huge amount of support from the event organizers: we role-played, strategized, and were told very precisely what we could expect throughout the process. In fact, parts of the arrest felt like I was enduring a performance of a script I’d memorized. The zip ties were coming off eventually, the doors would open eventually. I knew I had little to lose. The fun twist was not having to sleep in the cell, or spend hundreds of dollars to go home.

My arrest didn’t feel like a risk, it felt like a transaction. It was a transaction I felt called to make, but it doesn’t feel like the most meaningful step I’ve taken against the climate crisis. The transaction had a lot to do with my privilege: because I can afford the time off, because it won’t harm me in my line of work, because I dressed primly and looked for all the world like a woman who believes cops are here to protect me, because I’ve only had minimally bad experiences with threats to my bodily autonomy, it felt very safe for me, surrounded by a group of riot police experimenting with crowd-control maneuvers, to sit and sing on BP property and ultimately to cede control of my body, temporarily, to the state. 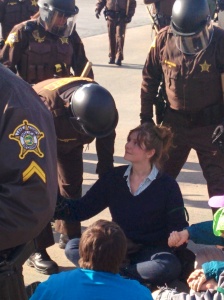 Not all actions are the same, and not all arrests are the same. When asked about our fears during our training, one young man stood up and said he was afraid of losing his student visa and being sent back to his home country if he were to be arrested. The group made it clear that we thought this was a foolhardy risk. (He did not take it.) Later, an organizer from Missouri remarked that many of his colleagues in Ferguson who risked arrest had open warrants from the North St. Louis County PD’s racist policy of traffic ticket-fundraising. These colleagues took the risk without knowing how they would be charged, when they might be released, what they might have to pay, how they could be treated. It was an easy choice for me to take the risk I had before me on Sunday. If my risk had looked like theirs, I’m not satisfied that I would take it.

I don’t write this to diminish what 41 of us did last weekend. White privilege and social capital seem well-spent in a jail cell crowded with climate activists. A woman in our group who looked like (and I’m sure is) someone’s loving mother guessed she’d been arrested 10 times now, always for acts of conscience. Without me, or her, or any one of us, the number would have been 40, which just doesn’t sound as good. But for two days after getting home I suffered from what I’ve been thinking of as an action hangover: is that all there is? This thing I’ve feared and avoided, now I have done it, and still it’s just one foot in front of the other. Still I’m just a person, and like all individual people, I have a severely limited capacity to effect change, when change is sorely needed.

Like so many American stories, the story of the lone hero isn’t true. Yes, I calmed my nerves in the paddywagon by picturing Hard Harry from Pump Up The Volume getting hauled away from his radio-jeep in handcuffs. Yes, I’m proud of myself for choosing to do this. But I certainly couldn’t have done it alone, and these days I’m skeptical of choice altogether: how many false ones are put in front of us to distract us from injustice and the work that needs doing? Our leaders in Paris met and behaved as if it was their choice to decide between 1.5 and 2 degrees Celsius, while 1.5 degrees rushes by our window. Our city pays PR firms to make choices like public transit and blue bag recycling seem appealing, while systematically destroying the public schools in which Chicago kids should be able to learn environmental science and critical thinking.

The paradox of being jailed to Break Free is not just a tool to put the fossil fuel industry on notice. It’s a contradiction that I’ve found useful for self-reflection. In all three arrest-risking actions, I’ve found freedom in facing my fears and dispensing with false choices. There’s freedom in testing your mettle, trusting your instincts, and trusting your comrades, whatever they tell you in the moment. If, when, and how to risk arrest is only a portion of this work. I also believe I retained more personal freedoms and comforts in the ladies’ holding cell of the James Knight ‘Public Safety Facility’ than many non-jailed people alive today. My fear is that we’re approaching an era where such personal freedoms are a fond memory. Perhaps we can delay or prevent the worst of these costs. If such a thing is possible, it’ll be at least partly through these experiments in breaking free: taking risks and making the real choices while we still can. 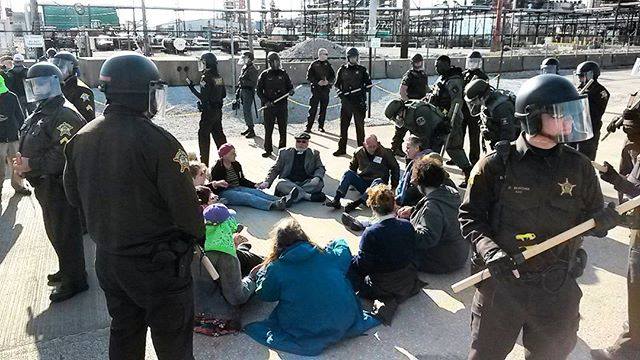 This essay originally appeared at Occupy.com on 5/23/16.