Read Forget Shorter Showers, and absolve yourself: the ecological crisis is not your fault.  In 2009, in an essay called Forget Shorter Showers, Derrick Jensen  laid out a heavy critique of consumer solutions to environmental problems. In the title example, he writes that “more than 90 percent of the water used by humans is used by agriculture and industry. The remaining 10 percent is split between municipalities and actual living breathing individual humans. Collectively, municipal golf courses use as much water as municipal human beings.” This split between the industrial and the municipal exists no matter what the resource is that’s being consumed.

The belief that we hold — that we can attain a kind of impeccability through our own consumption habits– is helpful to businesses because it can be used to sell us products (impeccable ones), and it is helpful to our egos because it makes us feel like we’re actually accomplishing something. If we set aside for a moment the perhaps-mythical people who genuinely feel like radicals when they buy organic pears from Peru or a breast-cancer-pink lipstick, we have this other, much more human phenomenon of feeling big and important when we are actually small and kind of insignificant.

It is not your fault: free the mental energy you devote to punishing yourself for leaving the lights on, driving to your errands when it’s raining, taking the Styrofoam takeout container, time devoted to something dumb and shallow when GLOBAL WARMING, whatever your crime. It’s not your fault, and it’s not your neighbors’ fault, either. Free the mental energy you devote to judging your neighbors: her sprinkler that soaks the pavement over and over, his door ajar for fifteen minutes in the dead of winter, the endless rotation of  massive plastic toys, whatever their crimes. (And free the mental energy devoted to judging Derrick Jensen for his more peculiar views: here he is making sense, sometimes less so. So it goes.)

Sweep out the corners of blame, indignation, guilt, self-righteousness. Individuals are small in our individual habits, and so these are small matters. Pick a great matter: what is the mountain I’m going to climb? What is the big problem at which I am going to throw myself ? What non-consumer power can I use to change a system bigger than myself? With that great matter in mind, recommence the small disciplines as practice for mountain climbing.

Strengthen your ability to notice small things. Steward your possessions, moderate your consumption, and share widely. Be as kind to yourself in the hundredth imperfect attempt as you were in the first. Forget, forgive your forgetfulness, and remember again. 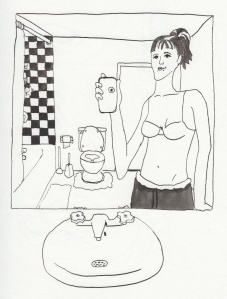